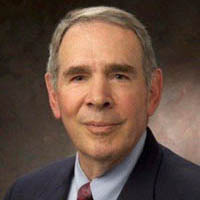 James was raised in Nebraska and graduated from high school in Hooper, Neb., in 1958. He was the Nebraska State Tennis Champion in 1961. In 1962, he received a bachelor of science degree in engineering from the University of Nebraska. His career as a civil engineer took him to Missouri, Minnesota, Wisconsin, and Georgia, before he moved to Blacksburg, Va., in 1986 to work for Hayes, Seay, Mattern & Mattern. He retired in May of 2013. James was an avid hunter and fisherman all his life, and was a passionate and skilled golfer for the past 45 years.

A memorial service to honor James’ life will be held at 10 a.m. on Tuesday, August 4, 2015, in the chapel of John M. Oakey & Son Funeral Home in Salem, officiated by the Rev. Dr. Jan Fuller of Elon University. Online condolences may be expressed at www.johnmoakey.com.