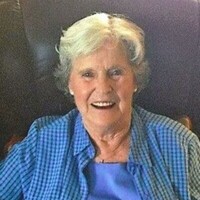 Stella Fox Holbrook Foster, 89, passed away Thursday, June 17, 2021 at her home in Radford. Stella, an amazing, loving, sweet, wise and kind true southern lady was the wife, mother, sister and friend that one could only wish for to have in their life.

A Coal Miner’s daughter, Stella was born on October 15, 1931, in a Coal Camp in Letcher County Kentucky to parents George and Delia Fox. She was one of seven children and she loved her parents and siblings dearly. A close family, of modest means, but rich with love and togetherness, they moved to a small farmhouse when Stella was young, where she began the daily tasks of gathering eggs, milking cows, feeding chickens, working in the garden and helping to care for her younger siblings, which continued throughout her adolescence.

Upon graduation from Whitesburg High School, Stella wanted to be a nurse, but her parents didn’t have the financial resources to send her to college. So, she got a job as a clerk in a large local general store, where she would work ten hours a day, six days a week for twenty dollars. An amount that she would always say was “good money back then.” After two years at the store and with a desire to do something else, she replied to an ad in a national magazine recruiting for stewardesses. A month later, a representative from Eastern Airlines walked into the store and said he was there to meet and interview her. Upon conclusion of the interview, he told her that she was perfect for the job and that he wanted to hire her. Flattered and tempted, nevertheless, she didn’t take the job and chose love instead of flying the skies, a decision which she never regretted.

She married Burnette Holbrook and they moved to Radford, where the Radford Army Ammunition plant had just opened and where Burnette had secured a job. Motherhood quickly followed in the years to come, having four children over a five-year time period. A natural mother, Stella stayed at home to care for her young children and became a favorite neighbor, church goer and friend to the residents of Clement Street, on the east end of Radford. Tragically she lost her first-born child, Jeff, when he was four years old and then her husband less than two years later.

Then, now a widow with three young children, Stella went to work at Kenrose Manufacturing and then later on to the Radford Army Ammunition plant, where she would regularly receive written commendations for her work, over the next twenty-five years. It was there where she met Lewis “Red” Foster, who she would marry, have a son and with whom she was married to for forty-four years, before his passing on March 21, 2011. Throughout those years Stella worked a physically demanding swing shift job, raised her family, enjoyed her time with her friends, siblings & relatives, cared for her parents and loved all. Her sweet personality, positive demeanor, pretty smile, infectious laugh, quick wit and her famous one liners/old sayings, made her adored by all who were fortunate enough to know her. Upon retirement, she traveled, gardened, read, mastered crypto quotes, regularly attended Calvary Baptist Church and babysat her grandchildren. One of a kind, Stella will be missed dearly by all, yet joyously welcomed by all in heaven. An Angel on earth has now gone home.

The family will receive friends from 10:30 am until 12 pm on Monday, June 21, 2021 at the Mullins Funeral Home in Radford. Funeral services will begin at 12 pm with Rev. Brian Cockram officiating. Entombment will follow in the Highland Memory Gardens Mausoleum in Dublin.

The Foster family is in the care of Mullins Funeral Home & Crematory. www.mullinsfuneralhome.com