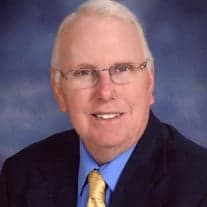 Gary Wayt Fissell, 79 of Christiansburg, VA passed away on March 2, 2022 in his home with his family. He was preceded in death by his son, Daniel; and parents, Gilbert and Myrtle. He is survived by his daughter and son-in-law, Kristine and Joey; his beloved grandchildren, Hannah, Logan, and Connor; and his brother, Gregory.

Gary was born in Washington, DC on December 12, 1942. He grew up in Arlington, VA, graduating from Wakefield High School. He served in the US Navy from 1962-1964 and was stationed on the USS Independence.

Gary was a salesman his whole life, from selling shoes as a young man to selling advertising for newspapers like the Washington Star and then selling cars. He ended his career working for the Town of Herndon before retiring in Christiansburg in 2010, where he could be near his daughter and grandchildren. Gary was a lifelong devoted Redskins fan, attending every game possible. He also loved his dogs, having many companions throughout his life. He was an avid bowler, enjoyed hunting, fishing, and gardening. He loved to travel to Myrtle Beach, where he played as much golf as possible. Gary was always on the go, always doing for others, and loved to be around friends. But the role Gary cherished most was being Pop Pop. He was a great father, and an exception Pop Pop to his 3 amazing grandkids. He took them to practices, attended games and school functions every chance he got. Gary was a kind, loving, and generous man who will be greatly missed.

Many thanks to his Carilion Hospice Nurse Becky and his outstanding caregivers, including Gary’s grandson Connor, who were with him every moment. Our family will always cherish the time we had with them.

In lieu of flowers please make a donation to the Montgomery County Humane Society.