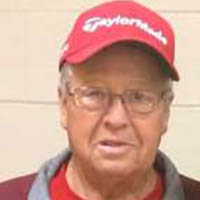 Phillip “Shady” Leroy Fisher, 76 of Pearisburg passed away Thursday, January 7, 2021. Shady was born on December 8, 1944 in Pearisburg and was the son of the late Albert and Ruth Fisher. In addition to his parents, he was preceded in death by two brothers; Robert Fisher and William Fisher.

Shady was a 1963 graduate of Giles High School. He was a retired employee of the Celanese Corporation and a member of the Pearisburg Fire Department for fifty-two years. Shady was one of the biggest Virginia Tech and Giles Spartan fans you would ever meet, cheering from the hill on the home side. His other passion in life was golf. He was a member of the Glen Lynn Church of Christ.

He is survived by his loving wife, Darlene Fisher, and four children, Jill Fenstermaker and husband Scott of Narrows, Phillip Fisher and wife Michelle of Dublin, VA, Michelle Nipper and Larry of Pearisburg, and Stacy Songer of Christiansburg; a sister, Brenda Day and Husband Kevin of Ripplemead; a brother, Terry Fisher of Ripplemead; a Papaw to six grandchildren, and four great-grandchildren; and numerous nieces and nephews.

There will be a Private Funeral Service held for the family. A public graveside service will be held for Shady at Birchlawn Abbey in Pearisburg, VA, Sunday, January 10, 2021 at 3:00 PM.

In lieu of flowers, the family requests that memorial donations be made to the Pearisburg Fire Department.

Online condolences may be sent by visiting www.kendallfuneralhome.com. The staff of Kendall Funeral Home are honored to be serving the Fisher Family.