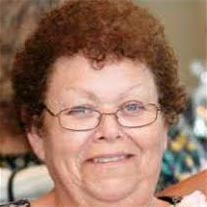 Linda Fizer Fisher, 60, of Blacksburg, went to be with the Lord on Sunday, February 21, 2016. She passed away peacefully with her family by her side. She was an inspiration and touched many people’s lives. She was a Mom and friend to many who will be dearly missed.

She was preceded in death by her parents, Paul and Alleen Fizer. Linda is survived by her daughter, Gerri Fisher of Blacksburg; son, Frank Fisher and wife Laura of Christiansburg; grandchildren, Ethan Fisher, Lucy Fisher; brother, Coby Fizer; sister, Becky Levesque; as well as several nieces and nephews.

The family will receive friends on Saturday, February 27, 2016, from 1-3 p.m. at Horne Funeral Home, with a Memorial Service to be held at 3 p.m. in the Chapel.