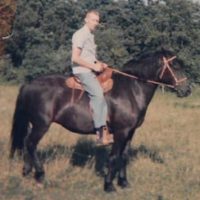 Boyd worked in the Mechanical Engineering Department at Virginia Tech as a Machinist for forty-six (46) years. Prior to Virginia Tech, he proudly served in the United States Army during the Korean War.

Boyd was lovingly known to his family as “Poppy” and “Red” to his friends and co-workers. A kind and generous man whose family meant the world to him, Boyd will always be remembered for his willingness to help anyone, no questions asked, as well as for his humility.

Boyd is survived by his loving wife of sixty-five (65) years, Pauline “Teeny” Hughes Fisher of Blacksburg, Virginia. His memory will be cherished by his grandchildren, Chad Broce (Gaile) of Clemmons, North Carolina; and Stacye Broce (Dwight) of Blacksburg, Virginia. The light of his life were his two great-grandchildren, Eliza and Nathan Broce, both of Clemmons, North Carolina. He was also survived by his daughter, Pamela Barbour (Chris); sister, Annie Oxendine (Bill); brother-in-law, John Hughes; nephews, Todd Hughes (Carrie) and Victor Sheppard (Sissy); and two special friends, C.W. Price and Christine McCauley. He also leaves behind countless caring relatives, friends and neighbors.

The family would like to express their gratitude to the staff at Good Samaritan Hospice for the excellent care they provided while Boyd was a patient. In addition, the pharmacy staff at Kroger on University City Boulevard in Blacksburg, Virginia, were also a tremendous help to the family. All the prayers, love and support during this difficult time were greatly appreciated.

A family burial service was held at Roselawn Cemetery in Christiansburg, Virginia on Friday, April 19, 2019.