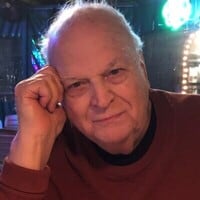 Francis “Frank” John Fiordalisi, 84, of Gainesville, Fla., passed away Saturday, January 22, 2022. He was born in NYC a son of the late John and Ines Fiordalisi.

He attended St. John’s University where he received a B.S. degree in Pharmacy. After teaching high school science, he returned to the practice of retail pharmacy. He later moved to Miami, Florida and joined the Miami-Dade County Police Department where he served in a number of assignments, retiring as a Detective Sergeant after twenty-nine years of service. His passion was writing, and he wrote and published his first book “Ichabod Wolfe” when he was 78 years old.

He is survived by his wife, Christine; daughter and son-in-law, Jacqueline Fiordalisi-Graves and Bryan Graves; son and daughter-in-law, Francis and Emily Fiordalisi; grandson, Jackson Fiordalisi, who called him Pop Pops; brothers and sisters-in-law, William and Connie Fiordalisi, and Gerard and Wanda Fiordalisi; sisters and brother-in-law, Irma Fiordalisi and Glenn Harris; and many other relatives and friends.

Private memorial services for the immediate family will be held on a later date.

In lieu of flowers, the family requests you consider donations to St. Judes Children’s Hospital or the charity of your choice.

The Fiordalisi family is in the care of Mullins Funeral Home & Crematory in Radford, Virginia. www.mullinsfuneralhome.com