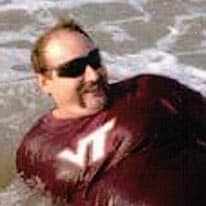 Jerry Michael Ferrell “Flipper or Mike”, 59, of Narrows, VA entered into the arms of Jesus after a valiant and exhausting battle with COVID-19 on Wednesday, November 17th, 2021, at Roanoke Memorial Hospital. In his last moments he was encompassed by a serene peace and the deepest love of his three daughters, Holly, Heidi, and Heather as he entered into the arms of Jesus. We are comforted in knowing that he is now reunited with his late mother, Elizabeth June Lawson. Mike was the foundational rock to his three girls and grandchildren, who he helped raised and support. The epitome of what an exceptional father, friend, brother, and Christian should look like.

Mike was born on June 15th, 1962, at Giles Memorial Hospital in Pearisburg, VA. He Graduated in 1981 from Narrows High School where he excelled in football, basketball, tennis, and baseball. Flipper was an essential player on many teams he played for and grew to be a leading hitter on the Green Wave varsity baseball team. He also spent time in high school coaching several little league teams over the years. He was an avid sports lover in general and was a lifelong fan of the Dallas Cowboys, Virginia Tech Hokies, and Pittsburgh Pirates.

Following high school, he used his skills as an exceptionally talented baseball player to play collegiate baseball at Bluefield College in Bluefield, VA. He played 2 years for the Bluefield College Rams before receiving a try-out for the Cincinnati Reds baseball team. During try-outs he threw his arm out of place hindering his chances of earning a spot that season on the team.

Shortly after try-outs, Mike became a father to his first-born daughter, Holly Ferrell, with mother, Sherry McGuire. In the next four years, Mike and Sherry would have two more daughters, Heidi, and Heather Ferrell. Mike started his lifelong career with American Electric Power (AEP) during this time. He had faithfully worked 36 years under AEP at the time of his passing.

Mike leaves his legacy to be carried on by his three daughters, Holly Ferrell of Narrows and two grandchildren, Savannah and Skyeler Wilson; Heidi Ferrell and Darrell Woodring of Rocky Gap, VA, grandchildren; Alysia Lopez, Isaiah Woodring, Ben Woodring and Jordan Woodring, Heather Ferrell Woods of Farmville, VA and fur babies, Piper, Pepper and Zeus. Siblings; Constance Ferrell of Radford, VA, Peggy and Charles Fraley of Narrows, VA, Rhonda and Jimmy McCroskey of Narrows, VA, and Darryl and Vickie Ferrell of Pearisburg, VA. He had numerous nieces and nephews who adored him.

Funeral services will be conducted Sunday, November 28th, 2021. Viewing will begin at 12-2pmwith the funeral following directly after. Pastor Eddie Kendall will be officiating. Burial will follow in Birch lawn Burial Park in Pearisburg; VA where he will be laid to rest. Online condolences may be sent by visiting kendallfuneralhome.com. Please share your memories of Mike with us as we find it to be a great comfort during this difficult time.