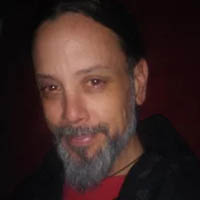 Jason John Felix, age 46, left this world in the early hours of Sunday, October 20, 2019, at his home in Christiansburg, Virginia. His loving wife, Angela and son, Wyatt were by his side.

Jason was born on February 1, 1973 in La Mesa, California to Tracey Anne (Woodyard) Mobley and Ector John Felix. He married the love of his life Angela Hylton-Felix on December 29, 2007. Jason was a devoted family man and loving husband, father, son, brother, nephew, uncle, Paw Paw and friend. He never met a stranger and his light was brighter than this world could stand. Jason was a talented musician and carpenter with numerous hobbies like mountain biking, forging knives and hunting. He loved sharing music and “breaking bread” with family and friends. Jason was magical.

Family and friends are invited to Horne Funeral Home located at 1300 N. Franklin St. Christiansburg, Va. for visitation at 6pm and memorial service at 7pm on Thursday, October 24th, 2019.