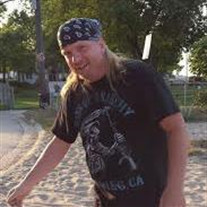 In loving memory of a wonderful husband, grandfather, father, family member, and friend. Jack Faulk, 37, of Christiansburg, went to Heaven on November 20, 2014, at 5:09 a.m. to be with his loved ones.

He’s been fighting brain cancer since he was 16, now being 37 he realized that his loving daughters, Rebecca Faulk and Alyssa Faulk; his step-children, Savanna Creighton, Cory Creighton, Natasha Galbenski; and his four-month old grandson, Troy Alexander Bean, could take care of his wife, Roxanna Faulk. By letting go it showed Mrs. Faulk that he cared about her and that family by having trust in them.

After two days of having radiation at UVA he wouldn’t respond to any of the doctors by opening his eyes or talking, once getting home he opened his eyes and saw the house decorated for Christmas, yes it wasn’t his favorite holiday, but you could tell in his beautiful blue eyes and the way that he started mumbling that he loved the house with all his heart. The girls’ last wish was for their father to see the house and realize that he was home.

Mr. and Mrs. Faulk met June 11, 2000, and got married at First Cumberland Presbyterian Church in Russellville, Arkansas, on May 30, 2010, they have been married four years, 2015 would have been five long loving years together.
“Even though he’s not physically here, I know he’s here with the family.”

He was born in Warren, Michigan on November 8, 1977. He was and still is the son of Sue Price and Jack Faulk Sr. Jack attended Romeo High School in Romeo, Michigan. His dream was to be a truck driver, when he was 23 in the year 2000 he accomplished his life-long dream. Growing up he loved to cook on his down time. As a teenager and up, Jack was interested in helping the elderly and his family by mowing the lawn, painting, and doing whatever needed to be done. If you couldn’t find him in his room or living room eating his favorite cereals, he was either in his car, or horsing around with his best friends, James, Jimmy, Alice, Kenny, Larry, and Jimbo. As his friends and family have said since Thursday morning, “he’s gone, but never forgotten, this isn’t goodbye it’s see you again.

Online condolences may be left by visiting www.hornefuneralservice.com.