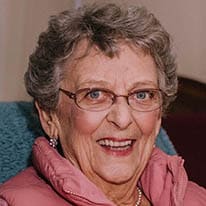 Nancy Ann Pashion Farmer, 87, of Pearisburg, VA went to be with the Lord on Tuesday, February 22, 2022, at her home surrounded by her family. Nancy was born on June 24, 1934, in Fayetteville, WV and was a daughter of the late Mitchell Neal Pashion and Rosa Mae Pruitt Pashion. Besides her parents, she was preceded in death by her husband, Robert Everett Farmer, Sr., and five siblings.

Funeral services will be conducted Saturday, February 26, 2022, at 1 pm at Angels Rest Fellowship Church in Pearisburg with Pastor Craig Whittaker and Dr. Don McKinney officiating with burial following in the Birchlawn Burial Park in Pearisburg. The family will receive friends Saturday at the church from 10 – 1pm before the service.

Special thanks to Good Samaritan Hospice along with all the wonderful caretakers who worked and allowed her to stay in her home. Their love and support were greatly appreciated.