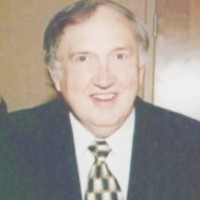 Don Lewis Fariss Sr., age 83, died in his home on the creek in Allisonia, VA of Parkinson’s disease on October 1, 2019. He was born on November 14, 1935, the son of Alven Pierce Fariss and Hetty Jo Lindsey Fariss.

Don retired from Klopman Mills in Altavista, VA after 30 years with Burlington Industries. He then moved back home to the creek where he was born to start Reed Creek Crafts with his son, Don, Jr., making custom furniture. He was a retired military veteran of the US Army where he served in Korea during the Korean conflict. After returning from his military service from Korea, Don attended Virginia Tech and was an avid Hokie until he left this world for the next. He served his Lord and as a Deacon in the Pulaski Primitive Baptist Church where he was song leader for 20 years. He was happiest when he was singing and leading the congregation in acapella harmonies.

He is survived by his high school sweetheart and the love of his life, his beloved wife of 63 years, Loretta O’Dell Fariss, of Hiwassee, VA. He has 3 children Dena Fariss of Raleigh, NC, Don Fariss, Jr. of Allisonia, VA and Johnna (Vincent) Russo of Dublin, VA. 11 grandchildren and 7 great grandchildren. Also, four siblings, Bruce (Cheryl) Fariss of Allisonia, VA, Patricia (Clyde) George of Winston-Salem, NC, Rachael DeHaven of Roanoke, VA and Michael (Carole) of Fredericksburg, VA.

Funeral services will be held 11:00 AM- Thursday, October 10, 2019 at the Pulaski Primitive Baptist Church with Elder Don Singleton
officiating. Interment will follow at the Fariss Cemetery, Allisonia. The family will receive friends between 5:00-7:00 PM -Wednesday,
October 9, 2019 at the Bower Funeral Home.

Bower Funeral Home, Pulaski is handling the arrangements for the family.

From God we did all come and to Him we shall all return.

The family thanks everyone for their prayers, du’a’, good vibes and happy thoughts as they remember their husband, father, grandfather, brother, friend. We may have different beliefs, but we were all united in our love for him.