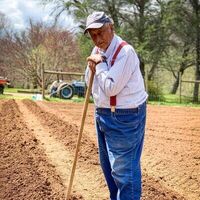 Fariss attended Draper High School where he graduated as valedictorian. After high school, Fariss graduated from Roanoke College in 1957 with a Bachelor of Science Degree and continued his education at the University of Virginia School of Medicine.

After graduating from medical school in 1961, Fariss joined the army as a general practitioner. In the Army, Fariss completed a residency in internal medicine and a fellowship in Endocrinology. Dr. Fariss had a distinguished Army career. He was promoted to Colonel by age 35. Fariss moved around the US and spent multiple years in Germany where he held numerous Director and Consultant positions for US Medical Command of Europe. After Germany, Fariss was stationed at Madigan Army Medical Center where he led Clinical Investigation, became the Director of the Endocrine Fellowship, and acted as Center Commander. During his military career, he held the esteemed position of Consultant in Endocrinology to the Surgeon General of the US Army. His most loved position was Director of Madigan Medical Center’s Research Laboratory, where he made numerous medical discoveries, applied throughout medicine today, and worked to publish 52 peer reviewed articles on various topics.

Dr. Fariss retired from the US Army in 1984 and started a private practice in Radford, Va which he later moved to Dublin, Va, where he practiced Endocrinology and Metabolism until 2020. He enjoyed local politics, serving as a member of the Board of Supervisors for sixteen years, and also as a member of the Pulaski County’s Planning Commission. During his years as Supervisor, he helped lead the development of Randolph Park and the paving of many rural roads within the county. Fariss’s other civic duties included: the New River Recycling Committee, the Pulaski County Recreation Society, The Southwest Virginia Governor’s School Education Foundation, the VA State
Gifted Education Advisory Board, the American Forestry Association, and the Board of Directors of the Tacoma Philharmonic.

While maintaining his private medical practice, Fariss was the Chief of Staff at Carilion’s New River Valley Medical Center for more than decade, worked as an adjunct professor in the department of biology at Virginia Tech. He also allowed medical residents to rotate through his practice, where he mentored many young students and residents.

Dr. Fariss was the member of many professional societies, including: the Southern Medical Association, SW Virginia Medical Society, Alpha Omega Alpha, American Federation for Clinical Research, the Endocrine Society, the American Diabetes Association, and the American Association of Clinical Endocrinology.

In February 2020, Dr. Fariss closed his practice and retired after 59 years of practicing medicine. He focused on helping his son, Adam, grow Iron Heart Winery. He also spent time gardening, enjoying time with family, and even writing several books. Dr. Fariss enjoyed shaping the people and world around him in a positive manner, he led a full life from his amazing career, to a large family, helped improve the community and maintained many interesting hobbies. He will be greatly missed by his family, friends, patients, and community.

To sign the online guestbook, visit www.bowerfuneralhome.com
Bower Funeral Home, Pulaski is handling the arrangements for the family.