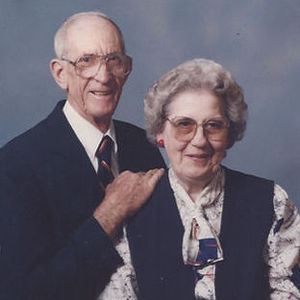 Dorothy and Kenneth were married in 1943 in Pearisburg while both were employed at Celanese. After their marriage, Kenneth was called away to serve his country in the U.S. Navy during World War II on the U.S.S Texas. As a devoted wife, Dorothy traveled by train to Washington, New York and New Jersey to be with her husband. Following the war, Dorothy and Kenneth made their home in Glen Lyn. She was a homemaker all her life, doing what a mother does best, raising a family and loving her husband. No two people were more devoted to each other as they were. She instilled in her family the virtues of loving everyone and looking for the good in people.

From this marriage, they had two children, Marilyn and Douglas. No two children could have been more blessed for having parents like Kenneth and Dorothy. Now, she is being united again in Heaven with Kenneth, celebrating a new life together.

Funeral services will be held Monday, March 31st, 2014 at 1 PM in the Chapel of Riffe’s Funeral Service in Narrows with Pastor Shahn Wilburn and Pastor Terry Easter officiating. Burial will follow in Birchlawn Burial Park in Pearisburg. The family will receive friends at Riffe’s Funeral Service Sunday from 6 to 8 PM. The family requests that those sending memorial contributions, please consider Giles Lifesaving and Rescue Squad; P.O. Box 439; Pearisburg, Virginia 24124.