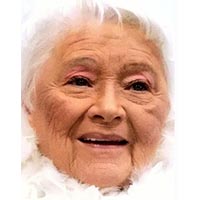 Barbara Trenar Farewell, 79 of Pearisburg, VA went to be forever reunited in heaven with her husband on Monday, January 18, 2021 at Heritage Hall Nursing Home, Rich Creek, VA. Barbara was born on October 12, 1941 in Giles Co., VA and was a daughter of the late Ralph Eddison and Virginia Hetherington Trenar.

Besides her parents, she was preceded in death by Perry Farewell, Jr. and one brother, William ‘Billy’ Trenar, two brothers-in-law, Frank Matuszczyk, William ‘Bill’ Melvin and best friends Joyce Dennis and Francis Morris.

Barbara was an avid crafter, where she was able to make absolutely anything by simply looking at it and was a huge Dallas Cowboys fan. She had a passion of going with her husband to the Shriner’s Conventions, hospitals and parades. However, her pride and joy came from watching her grandchildren compete and play sports. Until she became ill, she never missed any game or meet. She was extremely proud of Dakoda and Kiersten and wanted everyone to know it. Her presence will forever be missed in their lives.

She is survived by her daughter and caretaker, Bendy Farewell Shrader and her husband David of Pearisburg and the two most precious to her, her grandchildren, Dakoda Shrader (Morgan Williams) of Pearisburg, Kiersten Shrader of Pearisburg. Also surviving are her siblings, four sisters, Nancy Matuszczyk, Linda Melvin, Drema Simmons (Charlie), Carol Robertson and two brothers, Richard Trenar (Norma) and Tommy Trenar (Mary) all of Pearisburg, many nieces and nephews as well as fellow teammates of her grandchildren.

Funeral services will be conducted Friday, January 22, 2021 at 1pm at the Christ Fellowship Church in Pearisburg with Pastor David Bracken officiating with burial following in the Birchlawn Burial Park in Pearisburg. The family will receive friends one before the service at the church.

She was adamant about helping children so in lieu of flowers, please honor her request of making a donation to the Shriner’s Hospital for Children- Greenville, c/o Kazim Shriners, 628 Campbell Ave., S.W., Roanoke, VA 24016.

We will be observing COVID-19 precautions, please wear a mask and observe social distancing. Online condolences can be sent to the family at givensfuneralhome.com.