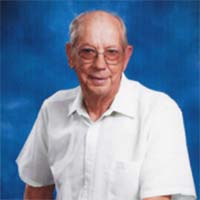 Garnett William Epperly, Sr., of Christiansburg, passed away on Friday, April 24, 2020. He was born in Montgomery County on March 31, 1933, a son of Posey and Lula Mae Hixon Epperly.

He was predeceased by his parents; his twin brother and sister-in-law, Garland and Connie; his brothers and sisters-in-law, Luther and Helen, Robert, Leonard, and Raymond; his sisters and brothers-in-law, Ruby and Frank Cupp, Delores and Clarence Lane.

Garnett (Teen) is survived by his wife of 61 years, Peggy Brumfield Epperly; his son and daughter-in-law, Garnett, Jr., (Bill) and Sandra; his daughter, Victoria (Vickie) Creed; three grandchildren, Sidney Marie Epperly, Candice Creed, and William Tanner Epperly; brother and sister-in-law, Reginald Ray and Edith; his sisters-in-law, Ruby and Joyce. Additionally, he is survived by many nieces and nephews. Mourning his passing are his devoted companions, Kova and Dippy.

He proudly served in the U.S. Army 4th Armored Division from June 1953 to May 1955. Garnett retired after many years as an employee of Reed Lumber Company. He played for the Ellett team of Mountain View Baseball League for a number of years. In later years he enjoyed bowling, bluegrass music, and rooting for his favorite Nascar driver, Dale Earnhardt, Sr. He and Peggy traveled extensively, their having visited all 50 states, Mexico, Canada, Europe, South America, and Egypt. For many years he was a member of the choir at North Fork Baptist Church and served as a deacon. He never met a stranger and spent many hours visiting the elderly.