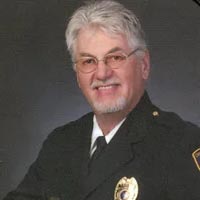 James “Jimmy” Wesley Epperly passed away on March 19, 2019. He served on the Christiansburg Fire Department for 54 years of which 38 years were as Fire Chief.

Jimmy had many accomplishments, of which he was very proud. After joining the Christiansburg Fire Department, he rose through the ranks as Firefighter, Engineer & Training Officer, Lieutenant and Captain. He was elected as Chief in 1971 & held that position until his retirement in 2009. He was hired by the Town of Christiansburg in 1988 to be the first paid career Chief. He was the longest seated chief in the history of the department to date (youngest chief in their history) He was President of the Virginia State Fire Chiefs Association 1998-99; appointed to the Virginia Fire Service Board by Governor Charles Robb in 1985; President in 1974-75 and Life member 1990 of the Southwest Virginia Firefighters Association; Charter member of the Virginia Fire Services Council; Chairman of the Montgomery County Fire and Rescue Commission 2005-10; Life member of the Christiansburg Rescue Squad; he also received a letter from President Richard M. Nixon in 1972 for his dedication to fire prevention.

He served as Vice President, President and Owner of Epperly Pontiac-GMC Trucks until 1988 when he became fulltime Fire Chief. He was a Long-standing member of the Christiansburg Hunt Club, and Past President.