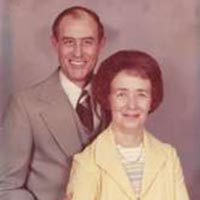 Christine Williams Epperley, age 89, of Rocky Sink Road, Newport, VA, departed this life Thursday morning, June 13, 2019 in the care of Heritage Hall in Blacksburg, VA. Born in Pearisburg on August 14, 1929, she was a daughter of the late Ward and Alice Breen Williams.

Christine was retired from the Celanese Plant at Narrows with forty-two years service and was a life-long member of Sherry Memorial Christian Church near her home.

She was preceded in death by her parents and her beloved husband, Raymond Donald Epperley. She leaves to cherish her memory her daughter and son-in-law Dreama and Steve Spiers of Richmond; her sons and daughters-in-law David and Lisa Epperley of Newport and Don and Laura Epperley of Newport; her six grandchildren and their spouses Matthew (Amanda), Michelle (Scott), Megan (Andy), Hunter, Meredith (Ben) and Andrew; her seven great-grandchildren; and a special cousin Janice Hypes.

Funeral services will be conducted Sunday at 2:00 pm in the Kendall Funeral Home, 605 Snidow St., Pembroke with burial following in the Williams Cemetery near her home. The family will receive friends at the funeral home from 12:30 pm until service time.

The family extends a heart-felt “Thank You” to Good Samaritan Hospice and the staff at Heritage Hall for their kind and skilled care for Christine during her illness.

Kendall Funeral Home-Pembroke is in charge of arrangements. Online condolences may be sent by visiting kendallfuneralhome.com.