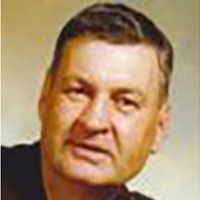 James Edward Epling, 67, of Mountain Drive in Pearisburg was called home after a long battle with cancer at his home on Friday morning February 17, 2006. Born in Giles County on August 18, 1938 he was a son of the late Virgil R. and Annie Bell Ratcliffe Epling.

He was a 26 year veteran of law enforcement retiring from the Giles County Sheriff’s Office in 1993 after serving under former boss and very special friend Sheriff L. W. Falls. He was a member of Pearisburg Lions club, AARP, RSVP, a volunteer at Carilion Giles Memorial Hospital, Celco Retiree’s Sunshine Club and was a Sunday School teacher and member of Edgewood United Methodist Church and member of Pearisburg Charge Wide Choir.

Funeral services will be conducted Monday at 2 p.m. in Pearisburg Christ Fellowship Church with Pastor Greg Cox and Pastor Rick Franco officiating. Burial will follow in Birchlawn Burial Park in Pearisburg. The family will receive friends at the Kendall Funeral Home at 605 Snidow St. in Pembroke Sunday evening from 6 to 8 p.m.

In lieu of flowers the family has requested that donations be made in care of Frances Epling, 328 Mountain Dr., Pearisburg, VA 24134.

The family would like to express their sincere appreciation to Dr. Harry McCoy and the Carilion Hospice Nursing Staff from Radford.

Online condolences may be sent by visiting www.kendallfuneralhome.com.