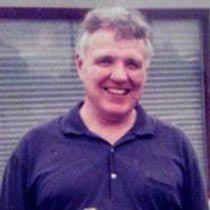 Doug attended Lynchburg College and Virginia Tech. He also served in the United States Army and was a sales representative for Schroeder Optical and Southeastern Optical, Roanoke.

Doug loved Virginia Tech Hokies and when in school there played on the golf team. Doug liked to play golf where he enjoyed the competition and friends he made through the sport.

Doug is survived by his wife of almost 60 years, Evelyn Hall English, his daughter, Evelyn Rebecca English (who gave tirelessly of herself to make the last stages of Alzheimer’s as comfortable as possible for her father) and her husband, Anthony Armstrong of Charlottesville, Virginia. His sister, Anne English Kiley and brother-in-law, Dr. James Kiley of Kalispell, Montana. His sister, Sara Jane English Ramsey and brother-in-law, Tom Ramsey of Raleigh, NC and many nieces and nephews.

A special thanks to the many dedicated caregivers, dear friends and family members that helped through Doug’s long journey battling Alzheimer’s.

A graveside service will be held 2:00 PM – Thursday, May 16, 2017 at the Oakwood Cemetery, 16 th. Street,NW,Pulaski with Pastor Tom Underwood officiating.

In lieu of flowers, memorials may be made to your favorite charity.

A reception at Al’s on First at the Jackson Park Inn,68 1st St. N.W.(Downtown Pulaski) will follow the interment where you will have the opportunity to greet the family.

To sign the online guestbook, please visit www.bowerfuneralhome.com Bower Funeral Homes, Pulaski is handling the arrangements for the family.