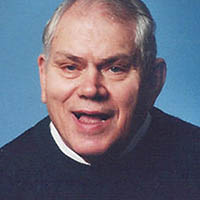 Daniel Ray Elmore, 79, of Christiansburg, formerly of Narrows, passed away Tuesday, September 15, 2015. He was born in Waiteville, W.Va. on August 22nd, 1936, and was the son of the late Clarence Carmel and Lillie Elmore Shrader.

Although handicapped as a child with Cerebral Palsy, he worked many years at Camp Easter Seals in New Castle, and also at New River Valley Workshop in Pearisburg and Radford. Dan was a faithful member of Providence Presbyterian Church in Christiansburg. The members there were like his second family, and showed their love to him in many ways. He loved to play solitaire and checkers, and was a big fan of “The Waltons” and “The Andy Griffith Show.” His family and friends will remember him by his favorite catchphrase, “Good Boy Good,” which he said after every meal.

Left to cherish his memory are his caregivers, Emily and Richard Lambert, and Cindy and Steve Lambert, all of Christiansburg; special nurses, Melissa Linkous and Michaela Miller; three aunts, Ellen Elmore of Roanoke, Phyllis Lyons of Bedford, and Martha Elmore of Blue Ridge, Va.; one uncle, Edward Elmore and wife, Sherry of New Castle; many cousins and friends, including special friends Timmy and Toni Robertson of Pearisburg, and Anna Welch of Narrows.

Funeral services will be held at 2 p.m. Friday, September 18, 2015 in the Chapel of Riffe’s Funeral Service in Narrows with Pastor Brian Waters officiating. Burial will follow in Birchlawn Burial Park in Pearisburg. The family will receive friends at Riffe’s Funeral Chapel Friday from 1 p.m. until just prior to the service. The family requests that those sending memorial contributions, please consider Camp Easter Seals of Virginia; 900 Camp Easter Seals Road; New Castle, VA 24127.

The family is being served by Riffe’s Funeral Service in Narrows, 540-726-2442, and online at riffefuneralservice.com.