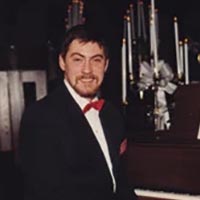 Timothy Wayne Ellis joined the Lord’s Army on September 10, 2020 after a long battle with short-bowel syndrome and finally pneumonia. On October 5, 1958 Tim was born in Newton, WV, the son of Fern and Delano Ellis.

His family later moved to Cottageville WV where his musical talent became apparent and he won a music scholarship to Marshall University. However, he moved to Sumter SC with his mother and eventually finished a BFA in Piano Performance at the University of Texas in San Antonio. Tim worked as a professional musician for 10 years and as the pianist for the Universal City United Methodist Church. He returned to school and earned his Teacher’s Certificate. For the next twenty years, Big Tim taught first and second grade at Wiederstein Elementary in Cibolo, Texas where he excelled at teaching and encouraging his students to read. He was especially thankful for his school district’s support as he learned to live with short bowel syndrome. Late in his teaching career he was recognized as one of the district’s teachers of the year, but shortly thereafter had to medically retire in 2010 after a second blood clot left him with only 3 feet of small bowel. His proudest moments came when former students wrote, visited or called to thank him for being a positive role model.

Tim was not a quitter and adopted a healthy lifestyle that included working out, cycling, and long distance running with friends. Getting himself in top physical condition enabled him to continue teaching and enjoying his family, friends, gardens, pets, and the San Antonio Symphony programs. In 2015, Tim moved from Universal City to Blacksburg, VA to be closer to family. Tim was a member of the Blacksburg United Methodist Church and while his health permitted enjoyed participating in the church’s musical programs and the Blacksburg Master Chorale.

Timothy is survived by his mother and stepfather Fern and Dan Joyce of Blacksburg, VA and his sister Heather Dani Joyce and brother in law Mark Williams of Christiansburg, VA. Also, the many aunts, uncles and cousins from the Lee and Nanny Ellis family of Newton, WV and the Tom and Clarice Davis family of Procious, WV. Tim was preceded in death by his father Delano B Ellis and his brother D. Blaine Ellis of Ripley, WV.

The family would like to take this opportunity to especially thank San Antonio based Doctors Steven E Hearne, Richard Fetchick and Randy Bergman and their staffs for their tireless in taking care of Tim between 1994 and 2015. Another special thanks goes to the Blacksburg Volunteer Rescue Squad who professionally responded to many emergency calls during the past 5 years.

The family is not currently planning a service for Tim and at a later date will bury his ashes next to his father’s and brother’s graves in the Laurel Point Cemetery, Newton, WV.