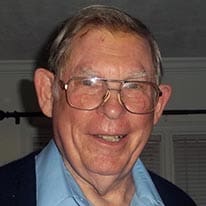 Robert John ‘Bob’ Elliott, Sr, went to be with the Lord on Wednesday, December 1, 2021. He was born in Chicago, IL and obtained his Bachelor’s degree from the University of Wisconsin, in Mechanical Engineering.

Bob moved to Narrows, VA in 1962, with his wife, Cathy, and worked at Celanese in Narrows, VA for several years, He then ran his own business for many years and ultimately retired after working as a manager for a Narrows construction company. Bob was a devoted husband, father, Lions club member and an active, faithful parishioner of Holy Family Catholic Church in Pearisburg, VA. He enjoyed many activities with his children as they grew, such as rafting, surfing at the beach, and back yard football games, where he was known for his “razzle dazzle” plays. He enjoyed watching Virginia Tech Hokies and Green Bay Packers football games.

Bob was married to the love of his life, Cathy, for 52 years. Upon retiring, Bob enjoyed traveling with Cathy and vacationing with his family. Bob demonstrated his love for God with his strong commitment to family and helping others throughout his life.

At his request, he was cremated. A funeral mass will be celebrated by Father Patricio Alcantara at Holy Family Catholic Church, Pearisburg, VA on Saturday, December 11 at 11:00 am. Family will receive friends an hour before mass. A celebratory reception will follow immediately after mass until 1:30.

In lieu of flowers, please consider donations to Giles County Animal Rescue in honor of his name.