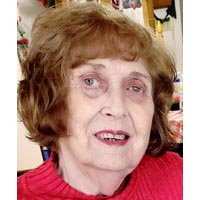 Nikola Maurine Sowers Eller, 81, departed her loving family and entered her heavenly home to spend eternity with her Lord and Savior on August 5, 2021. Nikola was born in Floyd, VA to Fred and Maurine Sowers, both of whom preceded her in death. She was also preceded in death by her brother, Frankie Sowers, and a great-grandson, Ryan Joseph Atkinson.

Nikola was raised on a farm in Floyd where she learned to love the outdoors and acquired her strong work ethic. She graduated from Floyd High School in 1958. She worked at the Radford Army Ammunition Plant for 25 years before retiring in 1991. She attended Abundant Life Fellowship in Pilot, VA. During her life, she displayed the Love of Christ to everyone she met through numerous kind acts, such as baking food for elderly neighbors or for people who had lost loved ones. She loved her flowers, birds, wildlife, gardening, and canning.

Nikola is survived by her husband of 62 years, Joel David Eller, her children, whom she loved deeply, Darryl (Patricia) Eller of Lillington, NC, Rita (Donn) Sunshine of Wytheville, VA, Tina Morrell of Christiansburg, VA, as well as her fur babies, Oscar and Princess.

Services will be held at Abundant Life Fellowship in Pilot, Virginia on August 9, 2021, at 3 PM with visitation starting at 1 PM. Burial will follow at Sunset Cemetery in Christiansburg, VA.

In lieu of flowers, donations towards Nikola’s medical expenses would be greatly appreciated. They can be mailed to Rita Sunshine at 148 Ellers Way NE, Pilot, VA 24138. Online condolences may be made at Gardnerfuneralhomefloyd.com. The family is being served by Gardner Funeral Home.