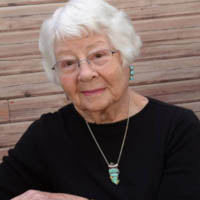 Donnabelle Mae Ekberg was born two miles east of Royal, Iowa, on the family farm on October 20, 1925, to her parents Franz Adolph Walstrom and Lila Mae Franker. She passed away peacefully of the Coronovirus and pneumonia on December 6, 2020, at her daughter’s home in Dublin, Virginia.

She lived on the family farm until 1938 when their family moved to Royal. She nearly died of spinal menangitis when she was five? six? years old and attended country school through 7th grade. She graduated from Royal High School in 1943 as class Salutatorian? Valadictorian?

On August 4, 1946, she married Robert William Ekberg at the Bethlehem Lutheran Church in Royal. They were married 56 years. Together they raised three children – Diane, Joan, and Robert (Bob). After their three children were in school, Donnabelle began a career at the Home State Bank in Royal. After 28½ years, She retired from banking on April 1, 1982.

After her husband Robert’s death on March 30, 1999, she moved back to Spencer, Iowa, and bought one of the first condos at Golfview on the 17th fairway of Spencer’s Municipal Golf Course – her dream. Donnabelle helped write their bylaws and served on Golfview’s Board of Directors as treasurer and as president. She also led exercises to a small group of senior citizen residents. She played or watched golf every chance she got. Nothing could stop her, not even a tornado. She was once on the golf course when the rain and winds picked up and the tornado sirens began to blow; everyone found safety in their basements, everyone except Donnabelle. She had two holes to finish, and she continued to play in the midst of the storm, refusing to quit.

And that is how Donnabelle lived her life – active and giving 100% in whatever she did. Her life centered around her family, her service to God and her community, her friends, and so many activities. She served on the Bethlehem Lutheran Church council as treasurer and as president of the BLCW, the Altar Guild, and the Mary Circle. She made and served Sunday coffee well into her 90s.

Donnabelle was a member of and served as president for both the Royal VFW Auxillary and the Royal American Legion Auxillary. She enjoyed cooking and baking (all who knew her loved her pies, but only her family knows the secret to her peach pie recipe), gardening, fishing, sewing, quilting, knitting, crocheting (when she didn’t have any specific patterns to work on, she made baby hats for the nursery at the Spencer hospital), golfing, playing bridge, and traveling. A few fun facts not everyone knows about Donnabelle is that she was a tap dancer, played trombone in the high school band, and wrote a little book – October’s Child – about her life.

Donnabelle is under the care of Mullins Funeral Home. A memorial service for Donnabelle will be held in the spring of 2021 at Bethlehem Lutheran Church in Royal, Iowa. A date will be announced at a later time.