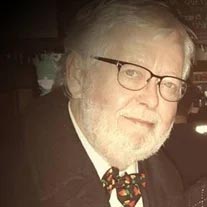 Dayton Eugene “Gene” Egger, 83, an Alumni Distinguished Professor Emeritus of Virginia Tech, died peacefully on May 21, 2022 at his home in Blacksburg, VA surrounded by his loving family. Born March 14, 1939, in Starkville, MS, he was preceded in death by his father Earl Egger and his mother, Francis Hightower.

Just like he dealt with all experiences in life, Gene managed his illness with strength and dignity and wanted to spend as much time with his loved ones as possible. A devoted husband to Dorothy and doting father to Kirsten, he lived a full life of travel and exploration and is leaving behind a sustained impact on generations of architects and students. He received his Bachelor of Architecture degree from Auburn University, and in 1969, while in the Master of Architecture program at Virginia Tech, began what would become a lifelong teaching career. His commitment and dedication to his family and education drove him throughout his life.

Reflecting on Gene’s contribution to the college, Jack Davis, Dean Emeritus and Reynolds Metals Professor Emeritus of the School of Architecture + Design at Virginia Tech said:

“Gene was a talented educator, pedagogical leader, colleague and mentor to thousands of architects. Virginia Tech recognized him for these qualities in 1987 with the William E. Wine award for Excellence in Teaching. During that same time, he was serving as the Associate Dean for Academic Affairs for the Virginia Tech, College of Architecture and Urban Studies. In his career, he taught all levels in the professional programs of architecture. This was recognized by the School of Architecture + Design at Virginia Tech with the Patrick and Nancy Lathrop Endowed Professorship in Architecture. For over four decades, he oversaw the European Studies programs and periodically was resident professor at the Charles Steger Center for European Studies in Riva san Vitale, Switzerland. His colleagues and students learned the fine art of architectural sketching from him. Dr. Greg Luhan chronicled his skill and manner of looking at the world around him in a monograph titled, “The Paradox of Place in the Line of Sight.” His impact on design education is significant as many of his former students and colleagues practice, teach and lead in architectural and educational institutions around the world.”

Gene’s work as an administrator also included serving as Director of Special Programs as well as Chair of the Architecture Foundation Program and Director of the Industrial Design Program. As a studio teacher, he earned the respect of generations of students and colleagues. He served as Chair of the Wine Award Selection Committee and as Chair of the University Academy of Teaching Excellence. In 2007, he was named one of the nation’s best design educators by DesignIntelligence, a national organization that ranks architecture and design schools. In May 2010, he retired after more than 40 years of service to Virginia Tech and continued to contribute significantly to the school for many years. He and Dorothy traveled and explored together and in June 2019 had the great honor of being by Kirsten’s side as she married the love of her life and has witnessed their happiness ever since.

Those left to honor his memory are his wife of 45 years, Dorothy; his daughter, Kirsten Egger Deyerle and her husband, Anthony Kirk Deyerle of Maidens, VA; many beloved friends, students who became dear friends, colleagues and cousins. They will find peace in the memories of his gentle manner, thoughtfulness, keen sense of humor and endless encouragement.

In a message recently received from Will Schmidt-Scott, a former student of Gene’s in 2014, he wrote:
“Your stories linger in my mind and I often hear your voice through my drawing, my writing, and my travels. I am lucky to have studied with you because you showed so clearly how to see the sensitivities of the world. Your influence has made me a more thoughtful person, and knowing you have shaped decades of students provides me hope for the future. We are grateful for you.”

A memorial gathering will be held at a later date in Blacksburg, VA. In lieu of flowers, please consider giving to the The Steger Center for International Scholarship in Riva San Vitale, Switzerland, or your charity of choice.