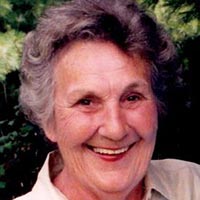 She was raised in Lowell, N.C. She played basketball at Lowell High School and was All-State. Bennie attended Duke University (class of 1947) where she met the love of her life, Ralph Pearson Edwards, and they were married in 1947.

Bennie received her Master of Counseling from UNC-G and was a guidance counselor at Proximity Junior High, Washington Street Elementary and Price Traditional schools in Greensboro. She retired in 1988. Bennie and Ralph moved to their beloved Knollwood in Floyd County, Va. In retirement she served on the Board of Directors and was President of the Tri-Area Clinic in Laurel Fork, Va. Bennie and Ralph were co-founders of the High Altitude-Low Society Supper Club.

Bennie will be remembered as a warm loving mother to her four children, five grandchildren and eight great grandchildren. Bennie’s humor was a source of laughter for all of her family and friends. She loved to cook – her fried chicken, macaroni & cheese, reuben sandwiches, buckwheat pancakes, jellies, chow-chow, cinnamon buns, Christmas baked goods of date cookies and stuffed cookies and orange fruitcakes and her infamous chocolate-peanut butter pie and Tonga Bars were favorites of many people. The family remembers countless weekends of wonderful, FUN times!

Bennie was an avid gardener – her yard at Knollwood was a spectacular show of daylilies, irises, foxglove, poppies, ferns, rhododendrons, and native azaleas every spring, summer and fall. She was a member of the Floyd Garden Club, and her garden was featured on their tour. She passed that love of cooking and gardening to her children who have many her plants in their yards.

Bennie was preceded in death by her parents; her brothers, Ira Jr. and Jack Harris; and sister, Lena Harris; as well as her mother and father-in-law Amy and WJ Edwards. Bennie is survived by her husband; her son and daughter-in-law Ralph Jr. and Ruth (Dance) of Oak Ridge, N.C.; her daughter and son-in-law Gibby and Buz Waitzkin of Floyd, Va. and Durham, N.C.; son and daughter-in-law Woody and Nancy (Huber) of Portland, Ore.; and daughter Nancy Allen and partner Mike Rigsbee of Hillsborough, N.C. Grandchildren are Pearse and his wife Mary of Seattle, Wash., Tia Martin and her husband Justin of Nashville, Tenn., Graeme Waitzkin and his wife Kate of Austin, Texas, Amy Wilson and her husband Gray of Durham, N.C., and Lindsay and her partner Kat Reach also of Durham. Great-grandchildren are Maya Dietrich, Ashton and Ruby Edwards, Miles, Wills and Shields Waitzkin, Georgia Martin and Julia Wilson. Bennie is also survived by her sister Peggy Grissom of McAdenville, N.C.; and brother-in-law John W. Edwards of Charlotte, N.C.; as well as numerous nieces and nephews.

A graveside service will be held at Elmwood Cemetery in Charlotte, N.C. at a later date. Donations in memory of Bennie can be made to the Warm Hearth Foundation.