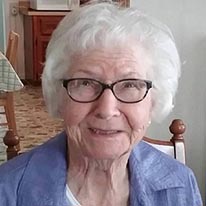 Hazel Earnest Eaton, 95 of Pearisburg, VA went to be with the Lord on Tuesday, June 7, 2022, at her home surrounded by her family. Hazel was born on September 2, 1926, in Salem, VA and was a daughter of the late Gaylord Thomas Earnest and Cora Lynch Earnest.

Hazel was a longtime member of the Ingram Village Methodist Church in Pearisburg. She was a strong, loving and caring woman. Besides taking care of her husband and children, she took care of her sisters, their husbands, her neighbors and friends in their time of need. She enjoyed crafting and was an excellent baker and cook.

In lieu of flowers, donations may be made to the Ingram Village UMC, c/o Janet Gregory, 150 Morning View Dr., Pearisburg, VA 24134.