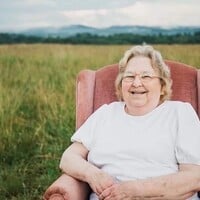 Elizabeth Ann Wilson East, 80 of Pearisburg, VA entered Heaven, embracing her Heavenly Father February 11, 2022 in the loving care of her family. Born January 13, 1942, she was a daughter of the late Homer Roy Wilson and Estie Fletcher Dulaney.

Elizabeth spent her life as a CNA. However, her love was shown to her family in cooking, sewing, showing love to the wildlife, and some special love to her grandchildren.