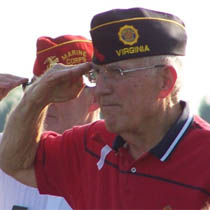 James Edward “Buddy” Earp, of Christiansburg, VA, passed away on February 24, 2016. Buddy was a lifelong educator and a retired colonel in the United States Marine Corps Reserves. He was a guiding star for many educators and students throughout his career.

Buddy was born on September 7, 1927 in Mountain City, TN and grew up in Bristol, VA. He graduated from Emory & Henry College and was one of the “Bristol Boys” that played football for Emory & Henry during the Tangerine Bowl Era. Buddy was a team captain and Little All American Honorable Mention. He is a charter member of the Emory & Henry Sports Hall of Fame.

Upon graduating from Emory & Henry College, Buddy enlisted in the United States Marine Corps and served in Korea where he was awarded a purple heart. He received a commendation for serving as platoon commander of an anti-aircraft automatic weapons platoon and organizing and training his platoon while in combat. In 1977, Buddy retired from the Marines as a USMCR colonel. He often spoke of the honor it was to have served his country.

After completing his master’s degree at the University of Tennessee in 1954, Buddy and his wife, Jane (“the best thing that ever happened to me”), moved to Christiansburg, VA where Buddy began his career as a teacher and coach at Christiansburg High School. He was chosen by his mentor, Superintendent Evans King, to lead the school as principal during integration. In 1974, Buddy left Montgomery County Schools to become principal at Marion Senior High School, and he spent the final ten years of his teaching career as principal at Glenvar High School in Salem, VA. He led Glenvar through its transitions from a high school to a junior high in 1977 and then its return to a high school in 1983.

The family would like to thank the staff at The Crossings in Blacksburg for their loving care.

A celebration of Buddy’s life will be held Saturday, March 5, 2:00 p.m., at St. Thomas Episcopal Church in Christiansburg where Buddy was a member and leader for 62 years. The family will receive friends 5:00 p.m. to 8:00 p.m. on Friday, March 4 at McCoy Funeral Home in Blacksburg, VA. Internment of Buddy and Jane will be in Arlington National Cemetery at a later date.