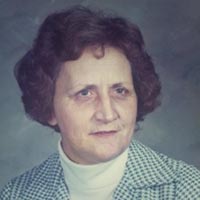 Martha Janney Earnest, 86 of Pearisburg went to be with the Lord peacefully at her home with her family by her side on Tuesday, April 29, 2014. Mrs. Earnest was born on December 19, 1927 in Bluff City, VA and was a daughter of the late Millard O. Janney and Lula B. Griggs Janney. Besides her parents, she was preceded in death by her husband, Gaylord Thomas Earnest and five brothers and three sisters.

Mrs. Earnest was a member of the Church of Jesus Christ of Latter Day Saints in Pembroke and was a retired employee of the Celanese Corp in Narrows, VA. After retiring from the Celanese Corp, She volunteered her time and service at Giles Memorial Hospital in Pearisburg. She loved to travel and took many trips including a trip to the Holy Land.