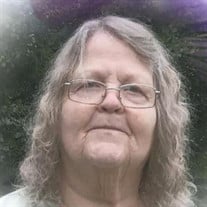 Margaret Harmon Early, 75, of Christiansburg, VA went home to her Heavenly Home on Saturday, July 23, 2022 with her son and daughter holding her hand. She was born in Christiansburg on August 5, 1946 to the late Walter and Lucille Harmon.

She was faithful to her town even when she had to raise her children in Blacksburg, VA but, she eventually returned to spend her final years.

Margaret was a God-fearing woman and she put all her faith in him. She would pray with and for anyone that asked. She was a faithful attendant at Bible Holiness Church where her best friend Sue would pick her up and take her, even on days when she felt she could not make it. You could hear her in church testifying and praising God when most days she did not have the ability to walk, sit, or even stand.

Margaret was preceded in death by her parents, her sister Lucille Marie Sumler, her nephew Stephen Sumler, her son Dusty William Early, and one grandson Bryce Edward Early. In her final weeks, her daughter and son would speak with her about meeting the family in Heaven and what a joy that would be. She would always cry and smile at the same time and state she could not wait.

Margaret requested a Celebration of Life when she departed as she said she did not want any to be sad but to rejoice and she is rejoicing with her God. A private Celebration of Life for her immediate family and Bible Holiness Church members will be held on Wednesday, July 27, 2022 at Bible Holiness Church 609 S. Franklin St. in Christiansburg at 6:00 PM.

Her family would like to thank the staff of Highland Ridge Rehabilitation Center, Premedica Hospice, and the Carilion Home health nurse who serviced mom when she was home.

In lieu of flowers, the family is asking for donations to be made in Margaret’s name to Bible Holiness Church to help spread the word of her Heavenly Father and Savior, Jesus Christ.