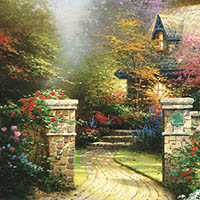 Mrs. Lena Ratcliffe Eads, 83, of Pulaski went to be with Jesus and all her precious loved ones gone before her on Monday, July 17, 2006. Heartaches and pain are gone for her now. She has received ultimate healing with God.

She was born in Wythe County on March 29, 1923 and was the daughter of the late Bert Ratcliffe and Annie Dean Ratcliffe. She was also preceded in death by her husband, James William Eads, a daughter and son-in-law, Gloria Diane Eads Austin and Freddie R. Austin, daughter, Lorene Eads Williams and a granddaughter, Crystal Newcomer.

Funeral service will be held Thursday at 11 a.m. from Stevens Funeral Chapel with Pastor Dan Lawson and Pastor Dale Akers officiating. Burial will follow in the Highland Memory Gardens, Dublin. Visiting will be Wednesday evening from the funeral home where the family will receive friends from 6 until 8 p.m. Arrangements by Stevens Funeral Home, Pulaski.