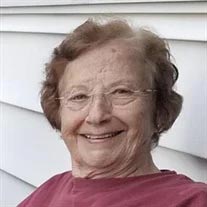 Lillian Dionne Dymock passed away on Tuesday, April 7, 2020 in Greenville, NC. Lillian was born on the 24th of September, 1931 in Thorne, North Dakota to her parents, August Boucher Dionne and Hermine Beruber Dionne.

She is survived by her sons and daughter in laws, JD and Myra Dymock of Winterville, NC, Mark and Kelly Dymock of Charlotte, NC and her daughter, Melissa Lee Dymock of NYC. She is also survived by her grandchildren, Andy, Leslie Zachary, Carson, Taylor and Alexis. Her remaining living relatives are her twin sister, Lorraine Buckley, older sisters, Thelma Dionne, Dora Diepolder and their extended families.

Lillian grew up on the farmlands of North Dakota, traveling by horse carriage to Notre Dame Academy in Willow City. She was a graduate of the class of 1949. The twins, Lorraine and Lillian ironically went to Twin Cities, Minnesota to learn key punching and then headed west to Vallejo, California to meet their aunt and other sister. The twins worked for IBM at the Port of Travis with access to the Officers Club. It was at the Officers Club that Lillian met a very friendly gentleman, James G. Dymock (Jim). He was a new graduate of the Corps of Cadets from Virginia Tech, who became her future husband.

They announced their engagement and relocated to the east coast where they married in Roanoke Virginia. Jim was asked to open and manage Davidson’s Men’s Clothing Shop in Blacksburg, Virginia where Lillian developed a deep kinship and love for Hokie Land. Lillian worked at Virginia Tech in the administration office for over 25 years. She lived in Blacksburg for 59 years and was a devoted Catholic, good neighbor and friend and a lovely wife to Jim. She was an amazing mother and her priority and loyalty was to her family, husband and her three children, JD, Mark and Melissa. She was a phenomenal baker noted by how often her kids friends hung around her house for Lillian’s made from scratch baked goods. Lillian will be greatly missed by all who knew her through the years.

Due to current times, we are going to have a memorial service the weekend of Virginia Tech Spring football game 2021 and details will be announced at a later time.

In lieu of flowers, contributions may be made to: Saint Mary’s Catholic Church
1205 Old Mill Rd.
Blacksburg, VA. 24060
stmarysblacksburg.org