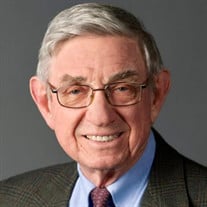 Preston Lee Durrill, 85, of Blacksburg, passed away on August 3, 2021. Preston was born on April 4, 1936 to Everett Durrill and Alice Roberts in Fort Madison, Iowa.

Preston spent 37 years as a chemistry professor and Dean of Graduate School at Radford University. After retiring from Radford University, Preston worked as a professor of chemistry and chemical engineering at Virginia Tech. During his 55 years of teaching, he also enjoyed doing science experiments for students in local school districts and working with teachers to further their science accreditation.

He is preceded in death by his parents and brother, David. He is survived by his beloved wife, Lorraine of 55 years; three children: Steven Durrill (Gwen), Beth Graham (Jim), Linda Durrill; and eight grandchildren: Katie, Preston, Ben, Mackenzie, Zoe, Ayla, Leo, and Penelope. He is also survived by his sister in law, BJ Durrill.

Preston had a passion for gardening, playing tennis, and teaching science. The time and contributions he donated to Radford University and Virginia Tech, as well as local K-12 schools, have left a lasting impression.

Preston’s patient, gentle, and caring nature touched and enhanced the lives of his family, friends, students, pets, and the countless plants he nurtured. All who knew him would agree that he left the world in a better place.

In lieu of flowers, the family requests that all donations are made to the American Red Cross where he faithfully donated blood and platelets. A private funeral service will be held for the immediate family. A celebration of Preston’s life will be held at a future date.