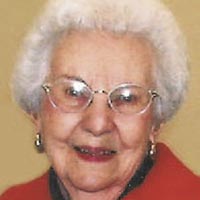 She was born in Craig County in 1921, the daughter of Vandon Worth Elmore and Arvada Caldwell Elmore. In addition to her parents, she was preceded in death by her husband, Herbert Francis Dupell in 1989 and brothers, Bowman R. Elmore and Jackson G. Elmore, both of Craig County. She was baptized into the Disciples of Christ Christian Church in 1932 and was a charter member of the Pearisburg Christian Church where she held many offices in the church and the Christian Women’s Fellowship. One of her great joys was planning and chairing the church’s 60th reunion in 2006.

Flossie was a graduate and valedictorian of her class at New Castle High School. She retired from the Celanese Fibers Corp. Flossie was a long time and dedicated volunteer for the Giles County Chamber of Commerce. She was a member of the Mountain Mist Garden Club, the Pearisburg Women’s Club, and the Giles Senior Center Advisory Board. She was also the family genealogist. She was an avid reader and bridge player. Since 1979, she traveled extensively throughout the U.S. and abroad. Her many travels included thirteen cruises.

She is survived by her son, Brian, and daughter-in-law Eugenia, of Stuart, FL; a daughter, Deborah Dupell of Charlottesville; two sisters, Shirley E. Brookman of Roanoke; Peggy E. Winesett and husband, Steve, of Rocky Mount; two sisters-in-law, Anita M. Elmore and Margaret B. Elmore, both of Craig County. Flossie is also survived by grandchildren, Jason Dupell of Statesboro, GA; Sarah Colon and her husband, Roger, of Stuart, FL; and Lindsey Dupell of New York City and great grandchildren, Savannah and Christopher.

Funeral service will be conducted Friday, January 27, 2017 at 1:00pm at the Givens Funeral Chapel in Pearisburg with the Rev. Jonathan Webster officiating with entombment following in the Birchlawn Abby in Pearisburg. The family will receive friends at Givens Funeral Home Friday from 11:00 – 1:00pm before the service. In lieu of flowers, memorials may be made to the First Christian Church, 210 Fort Branch Rd., Pearisburg, VA 24134. Online condolences can be sent to the family at givensfuneralhome.com.