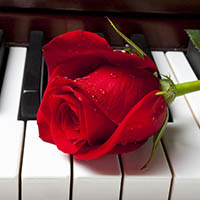 In addition to his parents, he was predeceased by two sisters, Mrs. Florence Elizabeth Robinson and Mrs. Louise Kent Tisdale. He was also predeceased by his nephew, Donald Andrew Tisdale.

After graduating from Christiansburg High School in 1938, he worked for two years before enrolling at the Philadelphia Conservatory of Music in Pennsylvania. His musical education was interrupted by the Second World War, during which time he worked in munitions industries to support the war effort.

Returning to the Philadelphia Conservatory after the war, he earned his bachelor of music in 1950 and his master of music in 1952. After graduating, he joined the faculty of the Conservatory and taught piano for several years. Then he began teaching music theory, history, harmony, and other related subjects.

He remained with the Conservatory through several mergers, and the school is known today as the University of the Arts. He received the Distinguished Service Award from the Pennsylvania Music Teachers Association and was honored with the Citation of Distinction by his school.

While living in Philadelphia he served as organist/choirmaster at a Lutheran church and later at a Presbyterian church. Later he joined Holy Trinity Church where he served on the Vestry and became a lay reader.

In 1991, four years after retiring, he returned to live in the Dunlap home place on East Main Street. He joined St. Thomas Episcopal Church and soon was pressed into service as interim organist/ choirmaster, which lasted eight years. He was also elected to the Vestry and served in other positions of leadership and again as a lay reader for worship services.

A memorial service will be held at St. Thomas Episcopal Church on Saturday afternoon, March 18, at 3 p.m. After the service and interment in the Columbarium, visitation with the family will take place during a reception in the Parish Hall hosted by the congregation.

His wishes were that any memorials be given to St. Thomas Episcopal Church.

The Dunlap family is being served by Horne Funeral Service, Christiansburg, Va., 382-2612. Online condolences may be sent by visiting www.hornefuneralservice.com.