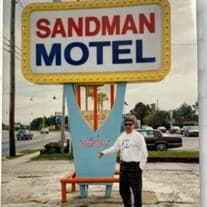 Our kind, funny and loving youngest brother, John Sanderson (Sandy) Doyle passed peacefully Thursday, January 13, 2022 from renal failure in Blacksburg, VA, with family by his side. We take great comfort in imagining him now with our mother, to whom he was devoted. Sandy’s compassion and care for her at the end of her life will be forever remembered and greatly appreciated by our family.

Sandy was always ready to laugh and share his sense of joy and irreverent views on life. He was the center of attention at every family gathering and his unique humor and gentle ways endeared him to everyone he met.

In 1975 Sandy graduated from First Colonial High where he was a skilled basketball player. He later played ball at Virginia Wesleyan College. In October 1985 he received a kidney donated by his brother Jim. Twice Sandy competed in the National Transplant games held in Indiana (1500 meters) then California (tennis).

His declining health played a key role in his decision to become an executive chauffeur. Holding this position for more than 10 years is testament to Sandy’s discretion, reliability and service. In 2003 he joined the Teamsters Union in Wilmington, NC and worked in the film and television industry as a driver. His professionalism was respected and appreciated by everyone. He loved this wonderful friendships he made with the cast and crews of his assigned films and shows, especially “One Tree Hill.”

Sanderson’s big, caring personality will be missed by many, most deeply by his three brothers and three sisters who adored him: Stephen and Jana Doyle of Blacksburg, VA; Jim and Kerry Doyle of Severna Park, MD; David Doyle and Annabel Grice of Newcastle NSW, Australia; Cherry Reynolds of TBD; Holly and Steve Hepner of Stephenson, VA; and Sally and Marvin Miller of Sterling, VA and his lifelong friends, Winston and Molly Carlyle of Richmond, VA. He was a beloved uncle to many nieces, nephews and their children.

Thank you to the staffs at Lower Cape Fear LifeCare, Wilmington, NC and Carilion Clinic New River Valley, Radford, VA for their excellent care of Sanderson and his family. If possible he would express his love, sincere gratitude and appreciation to his wonderful family for all their support, compassion and encouragement throughout his lifetime! “Be happy, healthy and safe!”