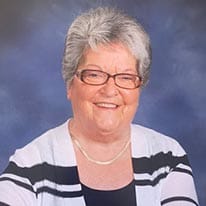 Alice loved being a mother and grandmother more than anything. She loved entertaining and cooking for her friends, family, and neighbors. Her bridge group friends in Glen Allen and Pearisburg were her best friends. Alice was very proud of her and her late husband’s work, along with Don and Susan Allen, for starting the Relay for Life chapter in Pearisburg. She enjoyed the many years spent at the beach with her “beach family.” She loved her church families at First United Methodist Church Pearisburg and Shady Grove United Methodist Church in Glen Allen. Alice made many new special friends at Woodland Hills, and especially enjoyed her Bible study and bingo games.

Family will receive friends at First United Methodist Church Pearisburg, Sunday, December 5, 2021, at 2 – 4 pm with a service following at 4pm. Burial will follow at the Birchlawn Burial Park in Pearisburg.

Memorial donations can be made to the American Cancer Society and Relay for Life.

The family would like to thank the nurses and staff of Woodland Hills Assisted Living, as well as the doctors and nursing staff in the CICU at Lewis Gale Hospital.