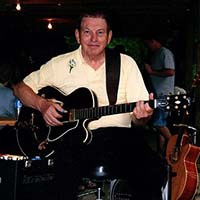 Joe (Joe Bud) Linwood Dowdy, 88 of Pearisburg, VA went to be with the Lord on Sunday, May 23, 2021 at his home surrounded by his family. Bud was born on August 6, 1932 in Newport, VA and was a son of the late Charles Arthur Dowdy and Rebekah Mae Higginbotham. Besides his parents, he was preceded in death by his wife of 57 years, Nancy Sue Blackburn Dowdy and three brothers, Allen Dowdy, Norman Dowdy and Peyton Dowdy.

Joe Bud grew up in Maybrook, graduated from the Pembroke High School (Cornhuskers) and then served in the United States Army in postwar Korea. He was a member of the First Christian Church in Pearisburg. He worked as a machinist at the Lynchburg Foundry and at the Celanese Corp in Narrows. He then pursued his passion of music selling music equipment in several stores in this area. He was also a well known musician through out the state.

Funeral services will be conducted Friday, May 28, 2021 at 1:00pm at the Givens Funeral Chapel in Pearisburg with Rev Dr Fred L. Austin officiating with burial following in the Birchlawn Burial Park in Pearisburg. The family will receive friends at the Givens Funeral Home Thursday evening from 6 – 8 pm. Online condolences can be sent to the family at givensfuneralhome.com.