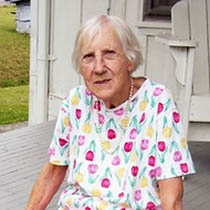 Emma Lucile Smith Doss, of Dublin, Va., passed away on Monday, February 24, 2014. Lucile or ‘Lucy,” as she was known, was born in Wythe County, Va., on April 1, 1920, and was preceded in death by her husband, Paul Vernon Doss; her parents, Henry Clay and Rosa Lee Clipard Smith; five brothers; and four sisters.

She is survived by sons and daughters-in-law, Arlen Clay and Emma Ruth Doss, of Bassett, Va., and Gary Paul and Barbara Charlene Doss, of Dublin, Va.; and daughter and son-in-law, Sue Carol and Paul Goldstein, of Henrico, Va. Lucile is also survived by four grandchildren and spouses, Martin and Cheryl Doss, of Harrisonburg, Va., Karen and Darren Keith Bowman, of Bridgewater, Va., Rachel Elizabeth and Mark Boggs, of Henrico, Va., and Andrew Stephen and Lori Doss, of Callands, Va. Her surviving great-grandchildren are Jillian Doss, Peyton and Carter Bowman, Blake and Justin Olsen, Taylor and Abbigail Boggs, and Callie and Nolen Doss. Lucile’s life was centered on her children, grandchildren and her great-grandchildren.

She enjoyed going to church, reading, travelling, visiting her friends and family, bird watching, and cooking and canning vegetables from her garden. She loved a manicured lawn and her flowers, going to the car races, and watching the VT Hokies and the Dallas Cowboys on television. She also loved her hometown of Dublin that honored her as the 2010 Grand Marshal of the Christmas Parade for her long time residency.

The family will receive friends and family beginning at noon on Thursday, February 27, 2014, prior to funeral services at 2 p.m. at Dublin United Methodist Church. Interment will be held in Highland Memory Gardens following the funeral services.

In lieu of flowers, contributions may be made to Dublin Methodist Church.

The family would like to give a very ‘Special Thanks” to the wonderful staff and employees at Highland Ridge Rehabilitation Center who gave love and support to our mother for the last three years.