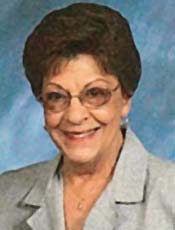 Charlotte Fay Brooks Dishon, 75, of Radford, passed away Saturday, April 19, 2014. Fay was a member of Central United Methodist Church and retired after 28 years as secretary to the History Dept. at Radford University. She was preceded in death by her son, David Todd Dishon, sister, Hazel Copko and brother, Kenneth Brooks.
Survivors include her loving husband of 56 years, Garnie F. Dishon; sons and daughters-in-law, Richard and Teresa Dishon of Dublin and Brian and Randa Dishon of Fairlawn; grandson, Andrew Dishon; granddaughter, Elizabeth Ward; great-granddaughters, December and Elease Ward; brothers and sisters-in-law, Donald and Jane Brooks of Glade Hill and Wayne and Linda Brooks of Newport News; brother-in-law, Roger Copko of Chesapeake; and sister-in-law, Charlene Brooks of Chicago, ILL..
Funeral services will be held Tuesday, April 22, 2014 at 2:00 pm at Central United Methodist Church in Radford with Pastor Dale Gilbert and Pastor Don Shelor officiating. Entombment will follow in Highland Memory Gardens Mausoleum in Dublin. The family will receive friends prior to the service from 12:00 Noon until 2:00 pm.
In lieu of flowers, the family requests that contributions be made to Central UMC, 803 Wadsworth Street, Radford, Virginia 24141.
The Dishon family is in the care of Mullins Funeral Home & Crematory in Radford.
www.mullinsfuneralhome.com