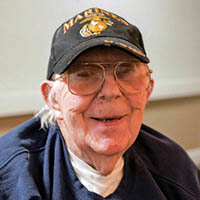 Freddie Kenneth Dillon, age 90, passed away on Friday, January 1, 2021, at the Commonwealth Senior Living in Radford, VA. Born June 24, 1930, in Cashmere, WV, he was the son of the late Fred William and Eady Viola Suttle Dillon.

Freddie lived with his wife Jane “Tiddle” for 40 years in Salem, VA, and before that 24 years in Staunton, VA. He was a member of the Arbor Hill Church of the Brethren in Staunton, VA, and attended the Ballard Baptist Church. He retired from the General Electric Corp. in Salem, VA, in 1995 after 40 years of service split between the GE Salem, VA, and GE Waynesboro, VA, facilities. He was a U.S. Marine Corps Veteran and served during the Korean War, where he was wounded and awarded the Purple Heart. Additionally, he was a member of the Narrows VFW and the Salem VFW.

He loved working around the yard with his wife, Tiddle, and around Tiddle’s old home place in Ballard, WV. They were happily married for 58 years until her death in 2008.

In addition to his parents, Freddie was preceded in death by his wife, Jane Elizabeth “Tiddle” Faris Dillon; one sister, Nora Virginia Dillon Humphries; and brother-in-law, Opie Leonard Faris II.

Due to the COVID pandemic, there will be no public services. In lieu of flowers, the family requests that memorial donations be made in Freddie’s name to your church or your favorite charity. Online guestbook can be signed or condolences may be sent to the family at www.broyles-shrewsbury.com. Arrangements by Broyles-Shrewsbury Funeral Home, Peterstown, WV.