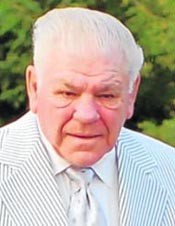 Donald Sherman Diggs, 77, of Christiansburg, went to be with our Lord after a courageous fight with diabetes on Friday, May 16, 2014. He passed away peacefully surrounded by family in the home he proudly built. He was born in Cumberland, Maryland on February 22, 1937 to the late Mr. Charles Sherman Diggs and Mrs. Beulah Christine Miller Diggs. Mr. Diggs was a United States Navy Veteran as a deep sea diver on the U.S.S. Sea Leopard submarine and having served his country during the Korean War. He is a lifetime member of the Veterans of Foreign Wars organization in Ridgley, West Virginia.

Mr. Diggs had experience constructing long-span bridges, working in nuclear power plants along the eastern seaboard, and at NASA. After coming to the New River Valley in 1966, Don owned his own welding business for many years and also built commercial buildings and residential homes. “Digger” also was a talented welder and retired member of over 30 years’ service to the Plumbers & Steamfitters Local Union 10 of Roanoke, Virginia. While being a creative prankster, his life revolved around sharing his knowledge and teaching others his crafts. His generous spirit touched the lives of many people including strangers and anyone in need.

He was preceded in death by his stepbrothers Charles Diggs and John (Jack) May, and stepsisters Milicent Wheaton, Dorothy Roby, Mary Todd, and Shirley May Cleary; and brother Joseph Diggs.

The family will receive friends on Sunday, May 18, 2014, from 1 p.m. to 4 p.m. at Horne Funeral Home, Christiansburg, Virginia. There also will be a visitation and funeral service on Monday, May 19, 2014, from 11 a.m. to 1 p.m. at Scarpelli Funeral Home, 108 Virginia Avenue, Cumberland, Maryland (www.scarpellifh.com), with a funeral service to follow at 1 p.m. in the Chapel. Interment will follow in Hillcrest Burial Park in Cumberland beside his father and mother.