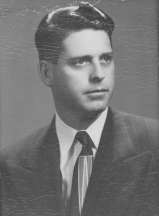 Daniel Ira DeVilbiss, 92 of Radford died Saturday, September 28, 2013 at his home. He was born to the late Edgar Grady DeVilbiss and Mamie Rose DeVilbiss on August 13, 1921 in Roanoke, Virginia. He was also preceded in death by a sister, Sue DeVilbiss Kuczko; and four brothers, John, James, Wesly and Roy DeVilbiss. He is survived by his wife, Lois Wood DeVilbiss; daughter and son-in-law, Rebecca and Randall B. Campbell of Roanoke, Virginia; son, Michael Alan DeVilbiss of Radford, Virginia; three grandchildren, Annie Campbell of Montreal, Canada, Emily Campbell Carter and her husband Chris Carter, and Jacob Campbell of Roanoke, Virginia. Two great-grandchildren, Alex and Wyatt Carter; as well as several nieces, nephews and cousins also survive. He was a graduate of Eckels College of Mortuary Science, an affiliate of Temple University Philadelphia, Pennsylvania. He served in various capacities in the Virignia Funeral Directors Associations. He was owner of DeVilbiss Funeral Home in Radford. Daniel was a longtime member of First Baptist Church, Radford Kiwanis Club, Issac Walton League, and the Dutch Dinner Dance Club, as well as a charter member of Round Meadow Country Club. Daniel was always active in sports – playing, coaching and supporting. He served on many charities local, regional and state. He served his city as President of the Industrial Commission, President of the Chamber of Commerce, and about 40 years as a volunteer fireman with the Radford City Fire Department. He served his country during World War II in the U.S. Navy. The family will receive friends from 6-8 p.m. on Monday, September 30, 2013, at DeVilbiss Funeral Home. A funeral service will be conducted at First Baptist Church, 215 Third Avenue, Radford, on Tuesday, October 1, 2013, at 2 p.m. Interment will follow in West View Cemetery.