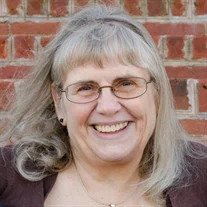 Catherine Mary Hodell Dennison died on Friday, March 5 in Blacksburg, VA. Cathee was born in Brownsville, Texas on October 16, 1944. Her father was a Navy aviator and her mother was a Navy nurse. During the war, she was raised by her grandparents, Mommo and Poppo, whom she loved deeply. She was educated in Dayton, Ohio at Catholic schools, including St. Helen’s grade school and Julienne High School. She was a 1966 graduate of the University of Dayton.

After living in many college towns for her husband’s education, she settled in the town she loved and called home for 42 years, Blacksburg, VA. It is here that she raised her children, grew professionally, and made her lifelong friends. While being a single parent, she earned her masters degree in English at Virginia Tech.

After she received her degree, she went on to become an instructor in the English Department where she taught Freshman Composition and excelled at making every student in her classroom feel at home in a very large, and sometimes intimidating university. Later she became the Director of the Writing Center at Virginia Tech where she lived her love: coaching and mentoring students, especially international students. Her house was always decorated with gifts from her students from across the globe. During her tenure as Writing Center Director, she started the VT Online Writing Lab (VT-OWL), an early innovation in on-line writing instruction and the VT Grammar Hotline, an email-based service responding to grammar questions from students and non-students, eventually hosting inquiries from all over the globe. It was during this time that a colleague dubbed her “Virginia’s State Grammarian.”

While in the English Department, along with Nikki Giovanni, she helped older adults at Warm Hearth write short stories, memories, and poems. These were gathered into a book: Appalachian Elders: A Warm Hearth Sampler, eds: Nikki Giovanni and Cathee Dennison. After retiring from Virginia Tech in 2004, in 2007 she returned to her love of teaching both undergraduates and senior writers. After learning about the Center for Creative Retirement model at UNC-Asheville, Cathee started the Virginia Tech Creative Learning Academy for Senior Scholars (VT-CLASS) in 2011 which served as a solid foundation that the Lifelong Learning Institute at Virginia Tech is based on today.

Cathee loved her community and church, Christ Episcopal Church. She sang in the church choir, volunteered at community events, and found pride in the work of the church. She volunteered for the Humane Society and in whatever way she thought might help those who needed it the most.

Knowing no stranger, Cathee was a warm and loving woman. She could win over anyone with her smile and touch of her hand. If she found out something you loved, you could bet you’d be gifted that for years. She had a strong spirit and could even be feisty at times. This spirit helped her during challenging times – during her periods of depression and health challenges. She loved her family – her extended family, her kids, and especially her beloved grandkids – and was blessed with lifelong friends who became travel companions, confidants, and supports.

Cathee is survived by her brother, Chuck Hodell and his family; sister, Linda Sherman and her family; son, Matthew Servaites, and grandson Elliott; her daughter, Mara Servaites and her husband Tom Allen, and grandchildren, William and Josephine; and her stepson Philip Dennison. Interment will be held privately at Christ Episcopal Church, Blacksburg. In lieu of flowers, donations can be made to the Humane Society of the New River Valley.