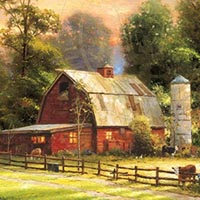 Howard Byron Dennis, 68, of Pearisburg, Va. went to be with the Lord Saturday night, September 8, 2007, at Carilion Giles Memorial Hospital in Pearisburg, Va.

Howard was born in Pearisburg, Va. on January 25, 1939 and was a son of the late Herman Bayard Dennis and Willie Pauline Johnston Dennis. He was a retired employee of the Town of Pearisburg and the Giles County PSA with over 35 years of service and also help on neighborhood farms. Howard was also a member of the Providence United Methodist Church in Wilburn Valley, was a member of the Tri-County React Club.

Funeral services will be conducted Tuesday, September 11, 2007 at 2 p.m. at the Givens Funeral Chapel in Pearisburg with the Rev. James B. Jenkins and Charles R. Henderson, Sr. officiating with burial following in the Carper Johnston Family cemetery in Wilburn Valley in Pearisburg.

The family will receive friends at the Givens Funeral Home in Pearisburg, Monday evening from 6 to 8 p.m. Online condolences can be sent to the family at www.givensfuneralhome.com.