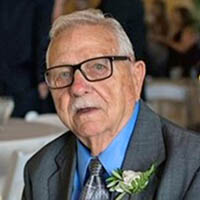 It is with a heavy heart that we record the death of Paul Allen DiMarzo, age 91 who passed away Wednesday, October 1, 2020, after a long but brave battle with heart disease. Born May 19, 1929 in Washington DC. to the late Paul DiMarzo and Anna Louise Etcher DiMarzo. Paul was raised by his father and grandparents Paul and Mary DiMarzo after losing his mother when he was just a young lad of 8 years of age.

Paul was a hard worker, an involved citizen who loved his country, his family and his Lord and Savior. At age 17, he bravely enlisted and served his country proudly during WWII with the United States Marine Corps. In his early years, Paul was employed by the Washington D.C. Fire Dept. and later he, alongside his wife, managed the High’s Dairy Products store in Carrollton MD. To support his growing family, Paul took on part time work as a bread truck driver and mail delivery. Later, Paul moved his family to Peterstown, WV where he took a job with the Celanese Corporation, where later he retired from.

Paul was a lifetime member of the NRA, a lifetime member of the Mountaineer Marine Corps League Detachment #957 in Princeton, WV and the Marine Corps Devil Dogs, Pound 331. Through his active participation with these organizations, he was able to continue to serve his community with projects such as Project Graduation, Toys for Tots, the Beirut Marine Barracks Memorial, among others.

Paul was a member of the Seneca Trail Church of Christ, born into Christ many years ago and has been a faithful servant to his Lord and loved him dearly. In his final days, his family was witness to hearing him in deep conversations with his savior, thanking Him for the wonderful life He had blessed him with, pleading with his Lord to spare him of his pain and the pain of his family watching him suffer, speaking the words “I’m ready to come home”.

Keeping with his wishes, Paul will be cremated. A graveside service will be held Tuesday, October 6, 2020 at 12:30pm at the Peterstown Cemetery in Rich Creek, VA, with Pastor Henry Conley and Ron Johnson officiating. In lieu of flowers, the family asks that donations be made to the Seneca Trail Church of Christ, Lindside, WV.

Due to the regulations associated with COVID-19, those attending the graveside service are asked to wear a mask and practice social distancing. Online guestbook can be signed or condolences may be sent to the family at www.broyles-shrewsbury.com. Arrangements by Broyles-Shrewsbury.com.