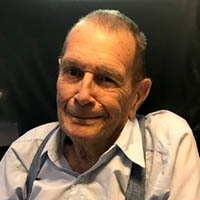 Dr. Robert William Dellers of Blacksburg, Virginia died on Monday, March 1, 2021 at the age of 91 years, 11 months and one day. Bob was predeceased by his wife of 63 years, Marjorie.

Bob was born and raised in New York City, an only child of Swiss immigrant parents. He earned his DVM at Cornell University School of Veterinary Medicine in 1954 and later went on to earn his PhD in virology, also from Cornell University. Throughout his career, Bob worked at Cornell University, Virginia Tech and finally at the Wisconsin Veterinary Diagnostics Laboratory in Madison, Wis. After retirement he returned to Blacksburg.

Affectionately known as Pooch by those who loved him, he was a man known for his attention to detail and his many passions. He will be most remembered for his sense of humor, love of cats and lighthouses, and countless hours spent puttering in his yard, most recently planting conifers.

A private memorial service will be held with the family at a later date.

A special thank you to Marcia and Medi Home Health and Hospice for their compassionate care.

In lieu of flowers, the family requests donations be made to Medi Home Health and Hospice of Pulaski, the Alzheimer’s Association, or your local public radio station.