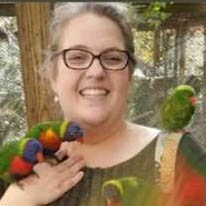 Ellen Joanna DeHaven, 45, of Hardy, Virginia, passed away in her home on Monday, August 1, 2022, with her husband, Ross Kelly, and other loved ones at her side.

Ellen was born to Harry S. DeHaven and Rebecca Gardner DeHaven in 1977, and grew up in Dublin, Va., graduating from Pulaski County High School in 1995. During these early years, she formed many lifelong friendships, which she carefully and intentionally nurtured throughout her busy, albeit short life. She received a BA in Foreign Affairs from the University of Virginia (UVA) in 1999, studying abroad in Peru, and thus whetting her never-ending appetite for travel.

After graduation, Ellen went on to work in the non-profit sector, notably for Habitat for Humanity in Davidson, N.C., as her passion and empathy for marginalized communities and individuals in need of compassion guided her work and other interests. After returning to Dublin to care for her mother during Rebecca’s battles with cancer, and having lost her father as a young adult, Ellen realized that she was being called to deeper work in healthcare, and she began to pursue her education in nursing, receiving her Associates Degree in Nursing from New River Community College in 2005, her BS in Nursing from UVA in 2007, and dual master’s degrees in Public and Community Health Nursing and Family Nurse Practitioner in 2010.

During her career, she enjoyed various types of nursing, including hospital/bedside, home health, hospice, and camp nursing in idyllic locations. She was a Nurse Practitioner in a breast health clinic before becoming an Associate Professor at Radford University Carilion, formerly Jefferson College of Health Sciences in Roanoke, Va. Ellen was a natural and impactful educator, being nominated for and receiving several teaching awards during her time at JCHS/RUC.

Ellen remained active in community work, serving as a board member for the Blue Ridge Chapter of the Susan G Komen Foundation, while also working with several breast cancer support groups and fundraising for breast cancer research. She was an avid supporter of the Angels of Assisi, and enjoyed fostering kittens and dogs, who benefitted from a home filled with several other four-legged friends.

Ellen loved music, taking and teaching lessons in voice and piano, as well as singing with the Roanoke Valley Choral Society. In recent years, Ellen attended the Roanoke Quaker Meeting, drawn to the Friends by their passion for social justice and practice of reflection. One of Ellen’s greatest joys was working with the Blue Ridge Literacy Program, especially helping those learning English as a second language.

Outside of her work and community interests, Ellen spent much time on the road (and in the air, and on the sea), trying to satisfy her wanderlust. She traveled with friends and family as much as possible, and she was delighted to return to Central/South America for her honeymoon after her wedding to Ross Kelly in 2007. In the years to follow, she and Ross enjoyed many adventures together, including trips to Iceland, the UK, the European continent, South Africa, and Cuba.

Ellen loved to invite friends and family to travel with her, and she was the most excellent photographer, leaving us with a treasure trove of photos to accompany the wonderful memories of trips and all the special occasions in our lives. While living with cancer, Ellen continued to plan and travel as much as possible. When she was not traveling, she enjoyed reading about other people and cultures in times and places past/present, near and far. She loved her family, including the dogs, cats, chickens, and bees, and never stopped teaching us by example how to love, care, and make time for each other.

Ellen will be deeply missed by her husband, Ross Kelly; his parents; siblings; nieces and nephews; as well as her sister, Emily (Doug) Rosson and family; her aunt, Ruth Ann Gardner; cousins, Sarah Samoray (Steve) and Matthew Gardner (Jayla); special “daughters,” Hanah and Sidney Dalton; and honorary grandson, Zylan Brown. Ellen’s other friends and family, while so important to her, are too numerous to count and name, but we are all better for having had Ellen in our lives, and we are grateful to have been woven together in Ellen’s tapestry of loved ones.

A celebration of Ellen DeHaven’s life is being planned for mid-late September.

If you are interested in making a contribution in Ellen’s memory, the following organizations are but a few which were important to her, Blue Ridge Literacy, 706 S. Jefferson St., Roanoke, VA 24016; Ellen DeHaven Nursing Scholarship at RUC- inspire.radford.edu/DeHaven; Roanoke Quaker Meeting, 505 Day Avenue, SW, Roanoke, VA 24016. Online condolences may be expressed to her family at www.Oakeys.com.